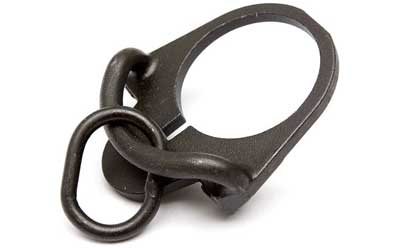 The ASAP Ambidextrous Sling Attachment Point allows a range of motion greater than 180 degrees, enabling true ambidextrous weapon manipulation for both left and right handed shooters. The ASAP replaces the standard AR15/M16 carbine stock receiver end plate, providing a tactical advantage by minimizing snagging and facilitating easy transition to and from weapon and reaction side shoulders. The ASAP works with Single-Point® type slings with snap hook style attachments such as the Magpul MS3 Sling.

Made from precision cast black manganese phosphatized steel, the ASAP is compatible with both mil-spec and commercial-spec carbine receiver extensions (buffer tubes). The ASAP has been proven to withstand stress tests of over 300lbs.

Ammunition, Magazines and other items are restricted in various jurisdictions throughout the United States. Please know the laws in your local jurisdiction. Dark Storm Industries will work with you to accommodate any legal purchase in these areas. Below are a few examples. Please contact us with any questions.

New York City - Ammunition order up to 200 rounds only. The buyer must provide a copy of their NYC Rifle / Pistol Permit before the order can ship. The easiest way to do this is simply photograph it with your Smart Phone and email it to info@dark-storm.com with your order number.

New York State - no sales to residents of New York City. All other counties are ok for retail or shipment.

Law Enforcement - If you are attempting to purchase a firearm or magazine in a jurisdiction where they are restricted to Law Enforcement Only, you will need to provide a copy of your law enforcement ID card before we can ship and if stated below, a letter authorizing the purchase for duty use on agency letterhead.

Below is a compilation of publicly available information to assist you in your purchases. The information contained herein should not be considered legal advise or any guarantee of legality. Customers should contact local law enforcement for clarification.