SPACE COAST, Fla. (June 15, 2021) – The Economic Development Commission of Florida’s Space Coast (EDC) today announced Dark Storm Industries LLC will relocate to Titusville, FL and expand its advanced manufacturing facility. Dark Storm is a federally licensed firearms manufacturer currently located in New York. The project is expected to create 50 new jobs with an average annual salary of $50,000 and a capital investment of approximately $3.2 million. Products manufactured by the company are shipped across the United States.

“The Space Coast’s diversified manufacturing base is a major reason why we weathered the pandemic and continue to build on our strengths,” said Lynda Weatherman, EDC president and CEO. “The EDC welcomes Dark Storm and their contributions to our economy, and I want to say how proud I am of the team we were able to put together to attract this growth-oriented company to the Space Coast.”

“The combination of economics and a friendlier political environment made the decision to build our new headquarters and manufacturing plant in Florida an easy one,” said Edward Newman, Dark Storms co-owner. “We are excited to join a growing number of gun manufacturers on the Space Coast and look forward to our new facility allowing us to both increase our production capacity as well as develop new and exciting products.”

The facility is expected to create an additional 20 indirect jobs and 17 induced jobs. The combined net new annual wages from all jobs are estimated to be more than $ 4.4 million with a contribution to GDP greater than $9.6 million and a 10-year economic impact in excess of $95 million. The selected site is located at 2000 Shepard Drive, Titusville, FL 32780.

“I commend Dark Storm Industries on their wise decision to make Florida their new base of operations,” said Secretary of Commerce Jamal Sowell, President and CEO of Enterprise Florida, Inc. “Thanks to Governor Ron DeSantis and his resolve to ensure our state remains open, we are welcoming new companies to our ever-expanding business landscape. We look forward to the positive impact Dark Storm Industries will have on Florida’s economy.”

“Brevard County and Titusville are open for business and home to a wide range of manufacturers in aerospace, defense and a growing firearms sector,” said Chair of Brevard County Board of County Commissioners Rita Pritchett (District 1). “Attracting a company like Dark Storm brings good-paying jobs to our community and increases our economic diversity.”

“The City of Titusville is extremely excited to welcome Dark Storm to our city. I am confident they will be proud to call the ‘Gateway to Nature and Space’ their hometown,” said Titusville Mayor Dan Diesel. “I am grateful for all the hard work of the Economic Development Commission of Florida’s Space Coast, the North Brevard Economic Development Zone and our City Staff. We look forward to assisting Dark Storm with their relocation and new manufacturing facility. Again, welcome to Titusville!” 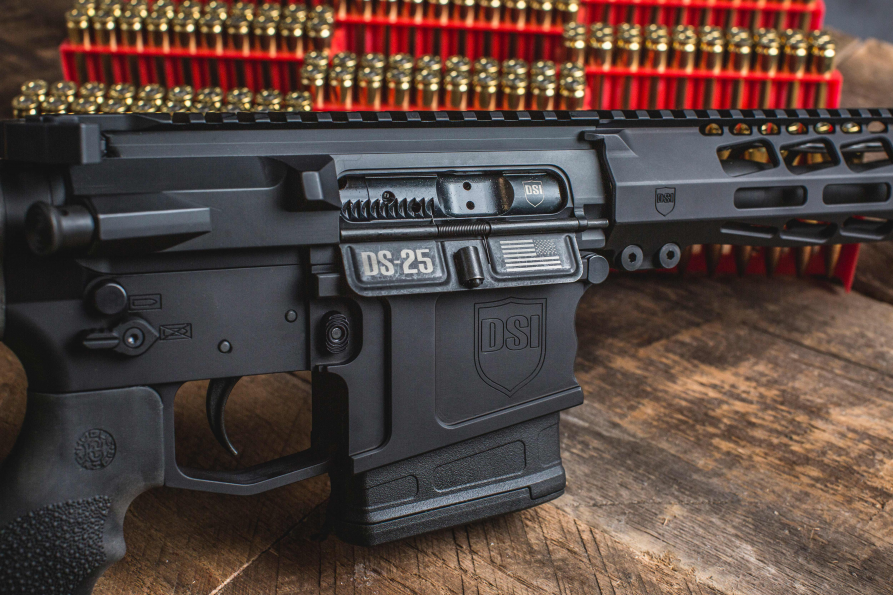 The new .308 DS-25 Sport Utility Rifle utilizes several AR-15 based parts, making it one of the lightest and most compact .308 semi-automatic rifles on the market today. The DS-25 is available in configurations for all 50 states.

“Six years in development, our goal for the DS-25 was to combine the range and stopping power of the .308 Winchester cartridge used in the AR-10, with the light weight and maneuverability of the AR-15 platform.” said Ed Newman, co-owner of DSI.  “Weighing only 6.7 pounds, the DS-25 Typhoon could be the lightest .308 semi-automatic rifle ever.” Mr. Newman continued.

The DS-25 Typhoon shares its feature set with the popular DS-15 Typhoon.  Based on a billet 7075 aluminum upper and lower receiver set with a nitride 4150 barrel, the Typhoon also includes a free float M-Lok handguard, as well as ambidextrous charging handle and safety selector.  The barrel and handguard length, grip, and stock/brace vary by configuration.

“The .308’s range and stopping power when combined with the compact size and weight of the DS-25 make it the perfect solution for both sporting uses such as a day at the range, as well as utility needs like hunting and defense.” said Mr. Newman.  “The mid-length gas system, paired with the reduced reciprocated weight of the AR-15 sized BCG and buffer, really reduce the recoil to near 5.56 levels.”

Configurations for All 50 States

The DS-25 will be available in four different configurations. The standard rifle includes a 16” 1:10 twist mid-length barrel along with a Hogue over-molded rubber grip and adjustable stock.  The firearm non-NFA with its shorter 12.5” barrel, front vertical grip, and SBA3 brace brings the .308 cartridge into the sub-compact “truck gun” market. DSI will also offer the DS-25 Typhoon in a fixed magazine iteration for states such as New York and California, as well as post ban for New Jersey.

“Dark Storm has always gone to great lengths to ensure that anyone who wants one of our guns has a configuration that keeps them within the confines of their respective state laws. The DS-25 is no exception," said Mr. Newman.

“We expect to begin shipping production DS-25 firearms late summer.” said Mr. Newman.  “We also recognize that not everyone wants to buy a complete gun. Assembling your own custom rifle is at the heart of America’s AR market. As such, we will be offering a builder’s kit which will include the DS-25 upper, lower, barrel, BCG, and buffer tube.  Customers can then assemble their own unique version using standard AR-15 components,” continued Mr. Newman. “One of the key focuses during the development of the DS-25 was designing it to utilize as many standard AR-15 components as possible.”

Dark Storm Industries is a New York based firearms manufacturer specializing in modern sporting rifles. Founded in 2013, Dark Storm Industries developed the DS-15 line of rifles to meet the changing regulatory environment in states like New York and California. DSI products are available from leading firearms retailers and distributors nationwide.

Massachusetts, January 16, 2020 -- Furthering its dedication to be a top provider of American-made firearms, parts and accessories, Dark Storm Industries LLC is pleased to announce its new strategic partnership with Interstate Arms, a leading wholesale distributor of firearms and related products based in New England.

Founded in 2012, Dark Storm Industries developed the DSI line of firearms to meet the ever-changing regulatory environment in states like California, New York, Massachusetts, Connecticut, and New Jersey. With their robust selection of quality firearms, parts and accessories, Dark Storm Industries was pleased to partner with Interstate Arms, a company that continues to expand their product offerings thanks to input from hundreds of satisfied dealers and the acquisition by the Witmer Public Safety Group.

With this new partnership, dealers will have even more legal and affordable options, which meet the specific legislation pertaining to their state, leveraging Interstate’s vast inventory and large customer base and Dark Storm Industries’ manufacturing abilities and expertise.

“Interstate Arms is proud to partner with Dark Storm Industries,” Said Rich Nutile, Branch manager at Interstate Arms. “Dark Storm has made incredibly innovative products that are legal in all 50 states. We appreciate their commitment to the firearms industry and spreading shooting sports to all corners of our country.”

“We are excited about working with Interstate Arms to increase the distribution of our products. Interstate Arms is one of the leading wholesale distributors for firearms and firearm parts and offers an alternative channel to the usual large distributors who have steered away from restricted states over the past few years. They have recognized the opportunity and grown to fill the needs of dealers looking to purchase  firearms and firearm parts behind enemy lines.” said Brett Snider, Sr. Account Manager at Dark Storm Industries.

In 2019 Interstate Arms was acquired by the Witmer Public Safety Group, and industry leader in the first responder gear market. This was done with the intention to grow Interstate’s well-established commercial distribution network as well as add to their ever-expanding law enforcement territories.

Dark Storm Industries has been in business for nearly 10 years and has become a leading manufacturer of premium, 50-state-legal AR style firearms.  DSI firearms are available in 5 different configurations to meet the legal needs of all 50 states.  They are 100% American-made and backed by a transferrable lifetime warranty. For more information, please visit http://www.dark-storm.com.